The name of French composer and musician Charles Tournemire (1870-1939) is familiar to organists. From 1898 to 1939, Tournemire was the titular organist at the Parisian Basilica of Sainte-Clotilde, a post once held by César Franck, his organ professor at the Paris Conservatoire. However, beyond the world of organists, Tournemire has been largely neglected and forgotten. This volume of collected essays, the first book on Tournemire available in English, aims at making Tournemire known to a wider audience. A number of essays investigate Tournemire’s best-known work, a monumental organ cycle entitled L’Orgue mystique (The Mystic Organ) composed between 1927 and 1932. Related topics include Gregorian chant, improvisation, and performance practice. Tournemire’s legacy is also considered in the careers of later musicians, including (among others) Joseph Bonnet (1884-1944), Maurice Duruflé (1902-1986), Jean Langlais (1907-1991), Olivier Messiaen (1908-1992), and Naji Hakim (1955-). Finally, beyond the organ, Tournemire’s literary world is examined: in terms of influences on his thought (especially Ernest Hello [1828-1885] and Léon Bloy [1846-1917]); and in his own librettos and commentaries written for numerous instrumental, symphonic, and operatic compositions. The portrait of Tournemire drawn in this collection is that of an unexpectedly complex and prolific thinker, teacher, and composer. 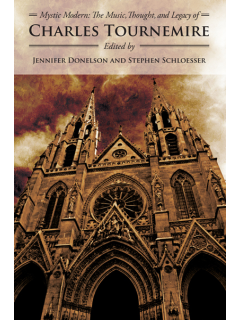