CURRENTLY ON SALE: BUY ONE, GET ONE FREE

Order one copy of this book and we’ll ship two (to the same address).

Few topics today stir as much passion as the question of the sacred liturgy, Vatican II and the liturgical reform. And of those topics, particularly passionate is the discussion which surrounds the question of sacred music. In fact, many hold that much that passes for liturgical music today is not of a sacred character, and can in fact be a source of dismay and distraction – or at very least does not raise one to the heights which one should be raised to during the Holy Sacrifice of the Mass.

I wish to provide a summary review of an important text which Roman Catholic Books has done us the immense favour of putting back into print. That book is Papal Legislation on Sacred Music. Now, do not let the publishing date fool you. While one might expect that any book published during the very time of the most exuberant application of the zeitgiest in the name of the “spirit” of Vatican II would most likely not be of much merit where Catholic tradition is concerned, Such is not at all the case with this text however. Msgr. Hayburn’s analysis is most certainly written with a keen eye for the tradition of Gregorian Chant and sacred polyphony, as well as an awareness of the problems with post-conciliar liturgical music:

“The legislation of Vatican Council II opened the door for radical changes in Church music. Emphasis on congregational participation and the introduction of the vernacular languages rather than Latin introduced a host of new problems. The result was an abundance of ‘instant music’ characterized by secular style and artistic shallowness… The traditional norms of popes and the Congregation of Sacred Rites have been overlooked.”

All that being said, it should be noted that Msgr. Hayburn does not focus on polemics, but rather on the task at hand, which is a study of the sacred music of the Catholic Church in the light of papal legislation on the same. Still, it is good for readers to know that the author is not uncritical of certain types of modern liturgical music.

As the subtitle of the book suggests, this study spans the nearly 2000 year history of the Catholic Church. That being said, lest readers be disappointed, note that you will not find a great plethora of first millenium material on sacred music. Much of what we have are fragments, however, they are interesting and worthwhile nonetheless, and there is a great deal which looks at the role of Pope St. Gregory the Great, which is of significant interest as well.

The majority of the material in the book begins with the Council of Trent in the 1500’s where more sources have come down to us. In particular, we have a great deal from the 19th century and the time of Dom Gueranger, Solesmes and Pope St. Pius X.

In terms of subject matter, there is of course a very good focus on Gregorian Chant, that form of sacred music so unique and central to Catholic liturgy. In addition, Hayburn then takes us through the introduction of and controversies surrounding polyphony, and the Church’s continual struggle to maintain the intelligibility of the sacred texts and to exclude inappropriate showmanship, secularization and other abuses.

One of the most attractive features of this book is its academic apparatus. It includes significant and extended appendices – almost 200 pages worth. This includes responses from the Congregation for Sacred Rites, spanning from 1597 to 1959, on matters pertaining to sacred music; a chronological index of papal documents which address sacred music; a collection of conciliar era documents on sacred music and of course a bibliography and index.

Beautifully and sturdily bound in a blue cloth hardcover binding, with gold gilt letter on the spine and front cover you will want to run out a grab a copy of this book if you are interested in the role of sacred music in our liturgy. Past controversies can help serve in present one’s as we seek to redefine what is and is not appropriate to the liturgy. Moreover, the presence of so many primary sources (found throughout the text in lengthy quotations, or as entire chapters in the appendices) makes this a rare and valuable resource.

Prior to it being reprinted, finding copies of this book was a scarce chance at best, being often only found in libraries. When they were found, they were priced between $200-250 each for used editions. Thus, to now have the book available for $69.75 is of great benefit. I would heartily recommend you pick up a copy now, before they again go out of print. 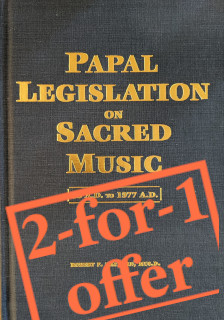 You're viewing: Papal Legislation on Sacred Music $69.75
Add to cart