The London Oratory Schola Cantorum present a celebration of Christmas from the Nativity through to Candlemas. This collection of music from across sixteenth-century Europe showcases Renaissance polyphony at its finest. 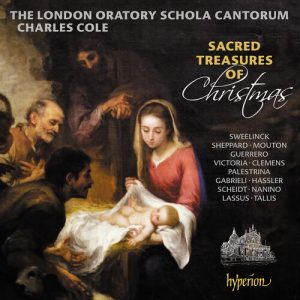 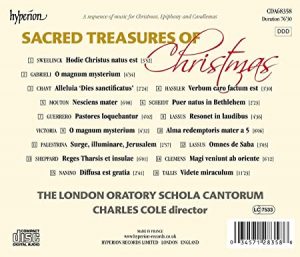 The Choir’s Director, Charles Cole said: “We are delighted to present our newest album which we recorded earlier this year. ‘Sacred Treasures of Christmas’ focuses on some of the most iconic polyphonic works written for the Christmas liturgy. These motets, rendered so beautifully by the greatest masters of the Renaissance, capture the awe, mystery and effusive joy of the Nativity.”

Sacred Treasures of Christmas, a sequence of music for Christmas, Epiphany and Candlemas, continues the ‘Sacred Treasures’ series, an anthology of sacred repertoire drawn from the liturgical motets which the boys sing at the London Oratory.

Charles Cole continued: “Through these recordings, the Schola seeks to bring to a wider audience the music which adorns the liturgies at the London Oratory. These motets have an important function within the liturgy and are not solely beautiful works of art to be appreciated in a removed context such as a museum or art gallery. Their sacred purpose, the way they are experienced by the boys who sing them, and the manner in which they are heard at the Oratory, are before all else within the liturgical context.”

The motets on the new album celebrate the Nativity itself, before moving on to the Feast of the Epiphany and the Adoration of the Magi, and concluding with the Purification of the Virgin. Amongst the composers represented are Victoria, Guerrero, Palestrina, Lassus, Clemens, Sheppard and Tallis. 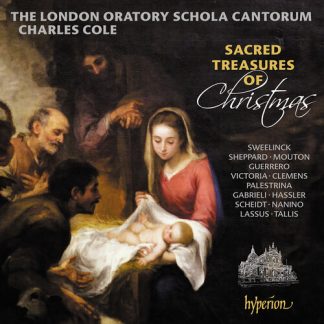 You're viewing: Sacred Treasures of Christmas CD $19.98
Add to cart