Sacred Treasures of Spain is the sophomore release from the London Oratory Schola Cantorum Boys Choir, one of three choirs of the world-renowned London Oratory choral program: a gorgeous must-have collection of sacred music from the Spanish Renaissance.

Charles Cole, Director of the Schola, says, “We are delighted to release this new recording of beautiful Spanish motets drawn from the repertory which we sing at the London Oratory. Sixteenth century Spain, known as the Siglo de Oro, truly was a golden era during which a number of outstanding composers crafted their most beautiful work, adding to the treasury of great renaissance polyphony.”

The choir’s critically acclaimed 2017 recording, Sacred Treasures of England, was praised by Gramophone as “a bright, joyful grain … with disarming freshness,” and ascended to the top ten of the Classical Billboard Charts in both the UK and the US.

The Schola Cantorum, which has been featured in a number of major motion pictures, including The Lord of The Rings, is making a 2019 US tour of the West Coast, including singing at three of California’s historic Missions. 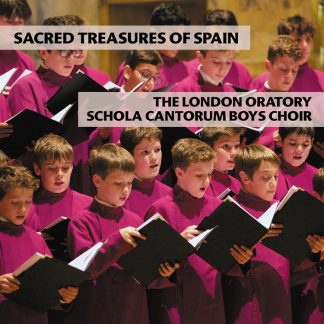